Hydroelectric power was the reason why the company’s site in the Isar Valley south of Munich was chosen in 1911. A number of clean hydroelectric power stations had been built along the Isar, and Dr. Gustav Adolph and Albert Pietzsch, the founders of the company, used the River Isar as a source of electric power and cooling water for the electrochemical production of hydrogen peroxide. 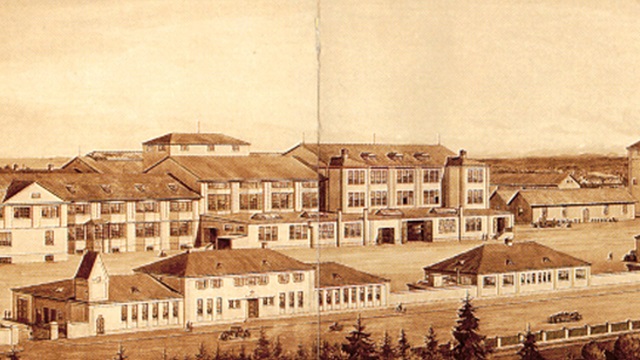 In the course of more than 100 years, the company’s history has been marked by constant and sometimes profound changes: through mergers and demergers, take-overs, acquisitions and joint ventures as well as through market and product development and diversification.

Today United Initiators is a global and leading producer of peroxide-based initiators and specialty chemicals and offers a broad range of organic peroxides, persulfates and selected specialty chemicals. The company has several production facilities in Europe, North America and the Asia‐Pacific region.

Milestones in the history of United Initiators

Patent for the production of Hydrogen Peroxide.

A concentration of Hydrogen peroxide solutions up to 81% is achieved, which can be seen as a major breakthrough (fuel for submarines and aero planes).

Branches out into the field of organic chemistry and begins production of organic peroxides.

From post-war period and “Economic Miracle” to the millennium

As a result of an exchange of shares, Laporte Industries – a UK chemicals company – becomes the sole shareholder of the company.

Following a worldwide merger in the field of peroxgen chemicals, EWM becomes a member of the Interox group (joint venture of Laporte and Solvay) changing its name to Peroxid-Chemie.

Interox group is demerged and Peroxid-Chemie becomes again a 100% Laporte subsidiary being part of the Organics Division with organic peroxides and persulphates as the main products.

Laporte is taken over by Degussa, thus becoming a part of the world’s leading specialty chemicals company.

After Degussa becomes part of Evonik Industries in 2007, Degussa Initiators is sold to Speyside and renamed “United Initiators,” as it is still called today.

United Initiators acquires Syrgis Performance Initiators in Helena, Arkansas. This enables UI to expand its product range and geographic reach with improved access to the organic peroxides markets across the Americas, Europe and Asia-Pacific in addition to a strong global persulfates position.

United Initiators GmbH acquires 100% of the shares of Hidrojen Peroksit A.S., (HPAS), a single plant producer of different qualities and dilutions of Hydrogen Peroxide (H2O2) in Turkey.
United Initiators’ new sodium persulfate plant is operational in Huaibei, China, since end of 2019. This project serves as key foundation stone for a multi-year mega-site build-up efforts in Huaibei.

United Initiators (UI) acquires 100% of the shares of the Hydrogen Peroxide (H2O2) plant from Evonik Industries in Prince George, British Columbia, Canada. UI Canada Ltd. is an established, stable producer of Hydrogen Peroxide, available in a variety of concentrations.